Hot Docs: An Interview With Linda Goldstein Knowlton (Somewhere Between)

Somewhere Between
Director: Linda Goldstein Knowlton
Screenings: May 1 and May 3 screenings
Tickets/Info: http://www.hotdocs.ca/ or 416-637-5150

donna g: Unlike other adoption films that I have seen, this one is different in the fact that these girls were given away, placed, abandoned (however you want to label it) because of gender. In watching the film, I was impacted strongly by this particular and painful detail. The four girls in Somewhere Between deal with this issue in very different ways. Did you choose the girls based on their varying response to this aspect of their adoption, or did you choose them based on their geographic locations, age? Could you please comment on how you chose Fang, Haley, Ann and Jenna?

Linda Goldstein Knowlton: While all of the girls adopted from China share a certain elemental experience, we all know that everyone is unique and develops their identity in individual ways. With this film, I wanted to be able to share a representation of the commonalities and the varieties of experience these girls may have, so I chose four girls who could do that. And because we're all shaped somewhat by our environments, it was important for me to chose girls from very different parts of the US; there are a lot of differences between Berkeley, CA and Newburyport, MA, for instance. I really wanted to make a film that shows that there's no one, 'right' way to experience adoption, and these girls (now young women!) helped me to do that in ways I never imagined.

As for the gender issue, that these girls now have the lives they have because they are girls....I thought about it constantly. But when I asked each of them about that, their answers surprised me. I come from a generation where being a girl created obstacles, and these girls see no limits to their opportunities based on their gender. However, each girl does understand how her past was impacted by the fact that she's a girl. 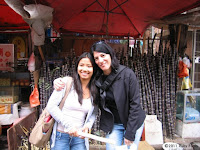 donna g: Fang seemed incredibly mature and confident. She even questions her age at the beginning of the film (15), believing that the orphanage chose a younger age than she was to make her more adoptable. Whatever her true age, I wonder if she was presenting well publicly while sublimating her doubts and vulnerabilities. Were there such moments with her during the shoot that didn’t make it into your final cut?

LGK: I have to say, I learned from Fang every day that I was with her...she's a truly insightful person. She, like everyone, has doubts and vulnerabilities, but I feel I presented her confidence accurately. And conversely, I didn't hide or shy away from using any footage of her. Of course, I also learned immensely from all the girls. They were all so incredibly open and honest. As I told them, their generosity is an immeasurable gift to so many people. 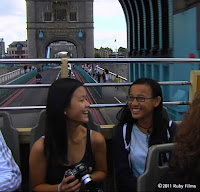 donna g: .I had never heard of Global Girls before your film. Could you please tell me more about it? Are you a member of the organization?

LGK:Global Girls, officially CAL G2*, is an organization formed by Jennifer Jue-Steuck. She was incredibly generous with her time and efforts, and introduced me to Jenna, Ann, and Haley. I filmed the girls as they took trips organized by Jennifer and CAL G2, but I have no formal association with the group.

donna g: There is a scene in the film where some of the girls are presented with information about international adoptions. It seemed such a harsh reality for the girls to face. They already know how difficult, if not impossible, it might be to find their birth parents, but to learn that they might have been placed for adoption without their birth parents’ consent seems an added burden to bear. How did you feel filming this scene? Did you experience any fears or doubts about your own daughter Ruby’s adoption? I mean, you are the mother of a Chinese baby.

LGK: Every family tells their children about their beginnings in China, the circumstances for their adoptions, in different ways. Especially at different times in the child's development - what I tell my daughter at 5 will be a different version than what we are able to discuss when she is 11. But the truth is, from the research I've done with adoption and child development specialists, all of these girls understand at a very young age that they were given up and for some very difficult reasons, mostly pertaining to China's One-Child Policy....which in turn promoted the boys being kept as the 'one child'.

Making this film was a very emotional experience for me. Every time I interviewed these girls, of course, I saw my daughter. It required a real effort to balance being a mother and being a filmmaker. Sometimes I succeed, and a few times it was impossible. I love these girls dearly. But as this film is about identity - and everyone can relate to that. 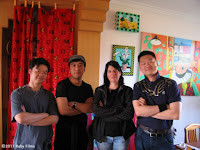 donna g: What was it like filming in China? Was it difficult to get work/filming permits? What did the Chinese people think of your subject matter? Did they consider it shameful that you were documenting such an emotional topic, a topic that some may feel is best kept secret?

LGK: We filmed in China twice, and both times were crazy, fun, and intense experiences. We didn't go around publicizing what the film was about, but when people asked we were very open that we were filming a girl, born in China and adopted by American parents who was coming back to learn about her roots and the country where she was born. We tried not to attract too much attention - although not always easy to do with a big camera and a boom pole. What we did find was that most of the people we spoke with did not know about Chinese children being adopted abroad.

LGK: The fact that this is true, is the whole reason I wanted to make the film. America is a melting pot. It's always been that way. In making the film, I learned that there's this balance between acknowledging differences and just living your life. It's not just about making families, it's being a family.

donna g: There are so many other questions that I would like to ask you, but I don’t want to give away any of the films secrets or surprises. Thank you so much for making this film and for doing this interview. tmtm
Images courtesy of Hot Docs and http://www.somewherebetweenmovie.com/

ABOUT CAL*Info provided by LGK about CAL.

Chinese Adoptee Links (CAL) International was launched in the summer of 2006 with a penpal program that connected adopted kids in Ireland with adopted kids in the USA…Here's our story...
~*~CAL is the first global organization created by and for Chinese adoptees and friends around the world.

~*~As CAL grew, we realized that the social problems that led to our adoptions (wars, famine, the one-child policy, AIDS) continue to affect thousands around the globe. So we launched an umbrella organization for CAL called "Global Generations, Inc."

~*~CAL's Mission: to create a social network for the 120,000+ Chinese adoptees in 26 countries worldwide. CAL's Vision: to use our social network to give back to the greater community ("bridging") through Global Generations, Inc.

~*~CAL is completely run by volunteers on 4 continents. We have more than 500 members in 12 countries thanks to your help.

If you would like to start your own G2 "Global Generations" Teen Club Chapter, please email G2 Director Grace Cheung at GlobalGenerationsInc@gmail.com.