They weren’t part of my 5-Minute Fringe special, but I managed to squeeze some other plays into my schedule. 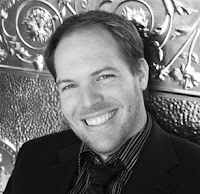 DESCRIPTION: The Editor: A Love Story is not to be missed! Well, it’s not exactly a love story, per se. It’s more of a philosophical story with romantic elements. Never mind. Let’s just call it “The Editor”. No subtitle. It’s by the winner of the 2010 Toronto Fringe’s 24-hour playwriting contest. So at least the writing’s good. Um. Maybe...clear? Clearer than this. Ugh.

Rating: **** 4/5 Stars
Condidering that I saw a truncated version of this play, it was surprisingly accomplished. The leads were not available to perform the show that day, so an former U of T Drama student and a bio-ethicist and model, stepped into the roles with only two days preparation. Great selections! I had forgotten they weren't the original actors until the new lead had to say "line"...and then back I was into the world of an angst ridden romantic editor, struggling with lost love, existensialism and a Frenc cemetary in the rain. It's a credit to the writer Jonathan Kline, who followed his new actors on stage, script in hand, that his play was so well-written that it could be as engaging without the technical details that originally were part of the script. At the end of the performance, Kline and stage manager, Kaline Janik showed us some of what we were missing, and I could see how they would be disappointed not to have shown us the work as intended, but I left the theatre feeling very satisfied. What's next Jonathan? I don't want to miss your next play.
Factory Studio Theatre
50 min.
Fri, July 15 5:30 PM 1356
Sun, July 17 9:00 PM 1370 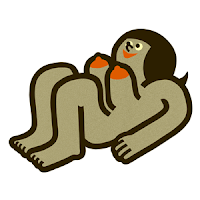 Every Woman I Slept With Before I Met You
by David Amito & AJ Bond
(www.davidamito.com/everywoman)
presented by Borderline Motion Pictures from Toronto, ON
Warning: Sexual Content, Mature Language

DESCRIPTION:Every Woman I Slept With Before I Met You is a darkly comedic one-man show about a naive young man who’s misguided attempts to woo his new girlfriend spiral out of control as he unwittingly reveals his entire sordid sexual history over dinner.
The Solo Room (at the Randolph Academy)
55 min.
Sun, July 17 2:15 PM 545

My Rating: *** 1/2 3.5 /5 stars
Strong storytelling is the key to success for this one-man show. With a simple stage set up of a table and chair Amito manages to grasp our attention for the simple fact that he is facing us, and we, the audience, become the stand in for his unseen date. Despite occasional questions to “the date” and the “waiter”, we are the ones he’s talking to. We are the ones who he tells about his encounters with women, Mandarin oranges, traveling through Europe, and his sexual fortunes and mishaps (there’s a dog involved, but it’s not what you’re thinking. What are you thinking?!). Woody Allen’s characters never had it so good or bad as David, and it’s this honesty as well as his engaging delivery that makes this show such an appealing ride. Who would admit publicly that they put women not on pedestals but on skyscrapers? Or that they became artsy-craftsy to win a woman with a one-of-a-kind box of chocolate? The fact that he gets knocked down by love but perseveres with giddiness and passion is admirable, pathetic, and funny. 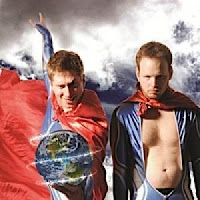 My Rating: *** 3/5 stars
This sketch comedy bromance, with an environmental theme, has some nice moments, including one featuring a Sarah McLachlan’s rescue puppy (I would kill to be able to watch that over and over on You Tube), and another consisting of two brain cells and their on-the-job shenanigans. It runs a bit too long, but the duo does a good job of amusing and maintaining audience attention.
By donna g at July 15, 2011