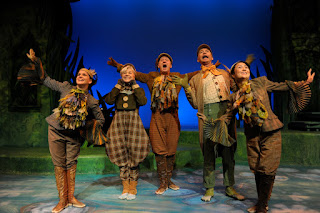 It's been a couple of weeks since I saw A YEAR WITH FROG AND TOAD, and I am still singing the darn, catchy tunes! Unlike annoying pop songs that infiltrate my head, I am quite happy to be singing lines like "toad looks funny in a bathing suit"! This adorable Broadway play has made its way to Toronto via the Lorraine Kimsa Theatre for Young People. The musical stars Allen MacInnes, the Artistic Director of LKTYP, as "Frog" and Louise Pitre as "Toad". That's right, Louise Pitre, the Tony-nominated, Dora-winning actress from such plays as Mama Mia, Toxic Avenger the Musical, Annie Get Your Gun, and most recently Love, Loss and What I Wore. 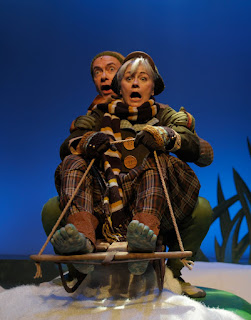 The play explores the role of friendship in a simple, meaningful manner. We follow Frog and Toad for a year, beginning with their awakening from hibernation. We also meet their pals Turtle, Mole, and Snail. The appeal of this children's musical is that it will delight both children and adults. The playful antics of the characters, the sharing between Frog and Toad, and the theme of friendship are showcased by the wonderful music and lyrics of Robert and Willie Reale. I dare you to go see this play and not be singing "the snail with the mail". I triple dog dare you!

On a sad note, but in keeping with the play's theme of friendship, Allen MacInnes stepped into the role of "Frog" when his good friend Denis Simpson died suddenly during rehearsals. While it must be difficult for the cast to do the show without Denis, I am sure that they must be comforted by the fact that they are doing something in the name of friendship.

I am so grateful that there is a venue in this city for family plays and musicals. How lucky are we, that our city has an actual building devoted to children (and youth)! So often family theatre is presented in rental spaces (which I'm not knocking, by the way) but the fact that LKTYP exists, gives family theatre an importance and relevance that is vital to introducing young people to theatre, and in nurturing (as well as sustaining) a theatrical culture in Toronto.

Who was your best-est friend ever when you were a little kid? Go see A YEAR WITH FROG AND TOAD and remember the pleasant memories.

There is a Pay-What-You-Can performance on December 18th at 2:00pm. For all details about tickets and performance dates, please contact the Box Office at 416-862-2222 or on line at www.lktyp.ca. The play runs until Dec. 30th.

In a Hotel Room With Three Men! 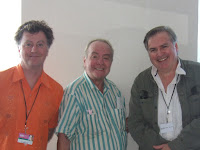 Hey, all! CLICK HERE to listen to my interview with Paul Clarke (director), Robert de Young (producer) and rock photographer, Leee Black Childers. We had a wonderful chat about their documentary, Mother of Rock: Lillian Roxon sitting on the floor of Paul's room at the Hyatt Regency Hotel. Well, Leee, had a place of honour on a hotel room chair. I also share my thoughts about the wonderful family musical A Year with Frog and Toad playing at the Lorraine Kimsa Theatre for Young People until Dec. 30th.
By donna g at November 25, 2010 No comments: Links to this post

Hi, All. The latest, TmTm podcast is up! Click here to listen. 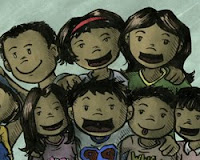 Guest:
Animator, Jeff Chiba Stearns talks about why so many of his relatives of Japanese descent married non-Japanese Canadians. Find out why by listening to the podcast about his film, One Big Hapa Family, which recently screened at the Toronto Reel Asian Film Festival. The film is a mix of animation (by Jeff and guest animators) and live action interviews with his family.
By donna g at November 11, 2010 No comments: Links to this post 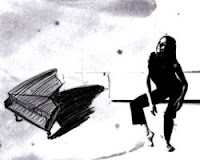 On the Flip Side is an entertaining showcase with films ranging from performance art (Exit Upon Arrival) to sexual fetishes (Covers) and family drama (The Auction). This mixed bag of shorts has many films of note, but the highlight for me is Howard Shia’s Peggy Baker: Four Phases. Watching Peggy Baker dance is always a treat, but in this film, her athletic technique and lean graceful limbs move so fluidly that you want to jump into the screen and dance along with her. Animating her movements and interspersing them with live action adds visual interest to Baker’s narration about living and moving through various spaces.
Thursday, November 11th, 6:30 pm, Innis Town Hall (Rated PG)

When something is good you know it, so need for me to wax poet about director, Phan Dang Di’s first feature, Bi, Don’t Be Afraid. The film is reminiscent of Edward Yang's Yi yi: A One and A Two, in that it is the story of an Asian family (in this case Vietnamese) seen through the eyes of a young boy who is naturally oblivious to the tense and complex relationships of the adults in his household. The unaffected storytelling and ease of the actors combined with some very lovely interior and exterior compositions, makes this film a satisfying experience. No wonder this film has garnered awards! Thursday, November 11th, 9:00 pm, Innis Town Hall (Rated 14A) 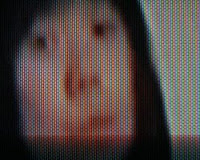 Learn some Chinese phrases (I’ve always wanted to learn how to say, “I love Andy Lau") and view China Town through the lens of seven talented, award-winning directors in Suite Suite China Town. Adding to the sweetness of this screening will be the live performance of music by Arthur Yeung and Theo Mathien’s by the Mary Ward Catholic Secondary School Band. Which film will be your particular favourite from the works of Lesley Chan, Lillian Chan, Aram Siu Wai Collier, Serena Lee, Howard Shia, and Joyce Wong? Since my, China Town means food, Heather Keung’s short film featuring a slow motion, pixel-filled, close-up of a woman chewing (dumplings, I surmise) earns a special place in my heart. Friday, November 12th, 7:45 pm, The Royal (Rated G)

You don’t have to see Fish Story to enjoy Yoshihiro Nakamura’s follow up film, Golden Slumber. In this thriller deliveryman, Aoyagi, has been framed for the assassination of the Japanese Prime Minister. Trying to escape the police and solve the puzzle of his bewildering and dangerous predicament, Aoyagi enlists the aid of friends, strangers, and a child-friendly serial killer whose catch phrase before he kills is “Did I surprise you?” The interactions with once close friends whose lives have taken different turns since their college days, lends a nostalgic undercurrent that grounds the surreal and darkly comic elements of the film. At 139 minutes, Golden Slumber is unnecessarily long, but even though it drags a bit, following Aoyagi to the end of his quest is an entertaining journey. Friday, November 12th, 10:00 pm, The Royal (Rated 14A)

Koji Yamamura: Master of the Form is your opportunity to delight in the brilliant work of this award-winning director. From his 1987 animated short, Aquatic, to 2007’s, Franz Kafka’s A Country Doctor, your eyes will be captivated by Yamamura’s creative expressions of whimsy and contemplation. My favourite in this collection of shorts, is the Oscar-nominated, Atama-yama/Mt. Head, which follows the mental and physical progress of a stingy old man who is determined to “waste nothing”. Whether you choose to view this film as a straightforward fantasy or moral and philosophical tale is up to you. Some of the best shorts I have seen. Saturday, November 13th, 12 Noon, NFB Cinema

Want an animation master class with Koji?
SAT NOV 13 | 10 AM – 12 PM | FREE with Pre-Registration
Click here for all the details.