TO REVIEWS: Are These Plays Worth 10 Bucks?

YES! (I would see this again)
I've had bad experiences at the Fringe with plays that were longer than the average 55-60 minute performance. More often than not, I leave the theatre angry, demanding the universe to give me my time back.  Happily, with The Dinner and Antigone, I am thanking the universe for granting them the extra time to tell their stories properly.
ANTIGONE
My Rating: 5/5 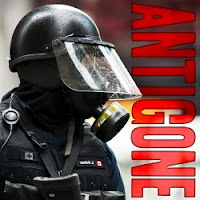 If you have any reservations about seeing this play because you've heard a G-20 reference, then put those aside. Contrarily, if you are seeing this because you're expecting a G-20 remake of Sophocles' play, then you might be disappointed. In Soup Can Theatre's version of the classic play about a ruler more obsessed with his own power than the well-being of his family or subjects, the G-20 is an underlying metaphor that referenced in set (the Fence), contemporary clothing, and the occasional inclusion of modern English. Cydney Penner plays Antigone with the feisty conviction of today's young protester, defiantly burying her brother despite King Creon's (her father-in-law-to-be) decree that his body be left for the birds and dogs to ravage. Thomas Gough owns the role of the King Creon, dominating the Randolph Theatre stage as his character does Thebes. As Antigone's sister, Ismene, Leah Holder succeeds in demonstrating an emotional balance between the Penner's militant Antigone, and Gough's monolithic, Creon. Providing comic relief with a very winning laid back performance is Chloe Payne. My one complaint about this otherwise, well-directed production by Scott Dermody, is the vacillating performance of the chorus, who are sometimes strong in their delivery and whimpy at other times.
REMAINING SHOWS
Antigone (90 mins)
Randolph Theatre (formerly Bathurst Street Theatre)
July 13 05:15 PM
July 15 07:00 PM
THE DINNER
My Rating: 5/5 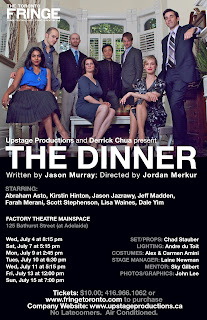 Under the masterful handling of director, Jordan Merkur (former artistic director of The Red Barn and Eclectic theatres) this splendid ensemble cast (Scott Stephenson, Lisa Waines, Kristin Hinton, Jeff Madden, Dale Yim, Abraham Asto, Farah Merani, Jason Jazwary) live Jason Murray's script with their every inflection and movement.  This juicy piece of theatre sees four friends, whose high school past is the sole thread linking them together, gathered for Thanksgiving along with their significant others (married and unmarried). Even before the host couple doorbell rings, there is a sense that all will not go right, as the high strung hostess berates her partner for inviting six people to the dinner instead of the usual four from the past two years. As the invitees chat over yummy hors d'oeuvres, minor disagreements flare into friendship altering ones, as some long-held truths are revealed and feelings are hurt. Kudos to Merkur for his excellent blocking of eight actors, placing them in areas of the stage that make sense for their characters to be at each given point in the script. Bravo to Murray for fleshing out adult roles that depict the real strain that exists when people no longer have anything in common, be in their romantic or platonic relationships. Chad Stuber's props, and costumes by Alex and Carmen Amini are tools that help define the time and place, while Andre du Toit's lighting brings the living room set to life.
REMAINING SHOWS
The Dinner (80 mins)
Factory Theatre
July 11 05:15 PM
July 13 12:00 PM

Written and performed by S. Bear Bergman, this performance is the usual Fringe length (under an hour), but there is nothing usual about this one person play in which Mary Pat (Bergman), an elderly white lady in sensible shoes dispenses information and referrals to young people at the government office of the Virginity Lost and Found, or as Mary Pat calls it, "the VLandF". Morgan Baskin's wardrobe for Bergman is perfect, creamy white patent flats, long loose skirt with a slight ruffle at the hem, and khaki bolero style cardigan worn over a plain pink cotton top. Bergman's iron gray wig is chin length bob and her face is framed with practical glasses. Bergman has powdered hir beard, and in so doing references post-menopausal hirsutism rather than drag. The poster for this show makes it seem rather vulgar, but Mary Pat is so sincere in her delivery and so circumspect, that you can't help but warm to her. Bergam perfectly performs the role of a well-meaning woman who truly want today's young people to be armed with the proper information in order to avoid such occurrences as Accidental Penetration. Mary Pat reminded me of my grade three elementary school librarian who used to share the joy of reading to us as we sat in a circle around her. This is funny play that uses explicit language relevant to the piece that evokes peels of laughter. This is not a performance of guttural coarseness for the sake of shock value. Mary Pat will have none of that!
REMAINING SHOWS
The Virginity Lost & Found (50 mins)
Tarragon Theatre (Extra Space)
July 11 02:15 PM
July 12 10:30 PM
July 14 03:30 PM
July 15 12:00 PM


Are These Plays Worth 10 Bucks?
NO! (Really, don't even think about going!)
These plays all have the same problem: good intentions, not realized. It's very frustrating to sit in an audience and see the potential in a show that goes nowhere, or worse bores you into nodding off.
...buffering
Legalize has impacted this fairy kingdom in which rhyming has become outlawed. Working the words "bro" and "superficial" into rhyming couplets isn't easy, nor is some of the other dialogue the actors deliver. The accompanying songs are the best part of this adult fairy tale, but this play will drag you off to dreamland with its slow pacing.
One in a Million
This musical about sperm trying to reach an egg needs to be re-worked. I can see the bones of a good show, but, boy is this one not ready for audiences. The first musical number feels late in coming as we watch a battlefield scenario play out, and some scenes need to be cut, as the sentiments are repeated too often. This is a show that demands significantly less dialogue, or even better, that it be sung through. I would really love to see what this could become after being workshopped.
The Judy Monologues
Film clips, a Judy Garland look-a-like primping at a dressing table, and three men recounting Garland's life (based on her own recordings) sounds like a fun time, right? Wrong. This is an example, "where less is more" would have made this even better. There is no distinction between the three men and the short segments with the mute look-a-like are so repetitive and dry that they become an annoying. A quick fix would be to have Michael Hughes (Mickey & Judy) do the entire monologue. Each time Hughes read, I felt the energy in the room go up. Judy Garland had her troubles, but she is remembered as a radiant performer. Unfortunately, this play doesn't reflect that brilliance.
The Princess of Porn
Not even good performances by the Fairy Godmother and the Fluffer could save this turkey about storybook princesses who are dissatisfied with their lives and make a trip to the Kingdom of Porn to see how the other half lives: the pacing is too slow, the story much too silly, and the singing off key.